Let me tell you a story…

Once upon a time there was a junior admin with a lot of hopes, willingness to learn and full of joy. He did go on an adventure into Windows world. One path he took lead him to a kingdom called SBS. There were 2000 and 3 castles in that land. He was stubborn, he was fierce and fearless. He did conquer that land. And it prospered for years later. Like a few others in his further journeys. 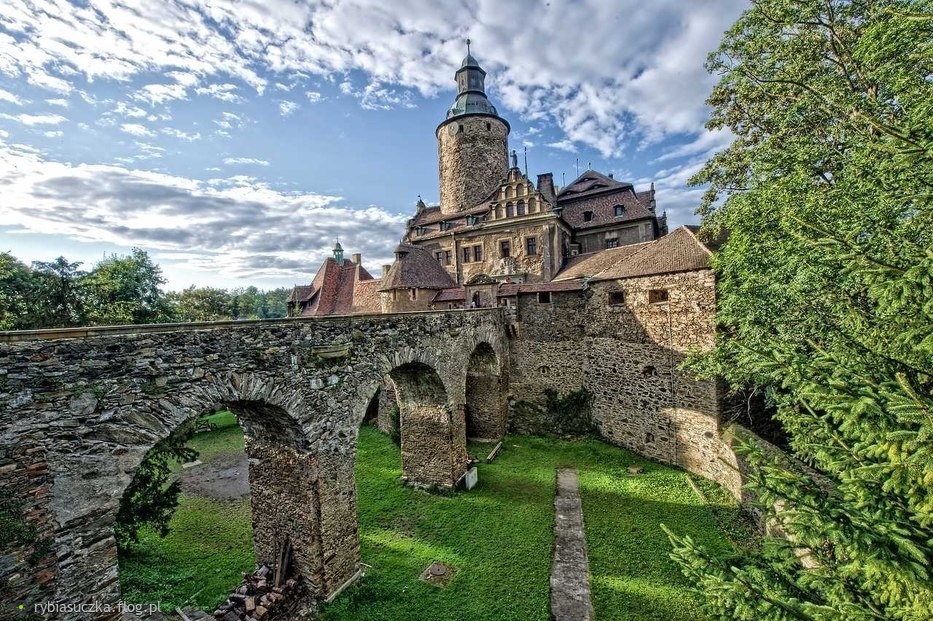 This tale is about a similar kingdom, build upon Windows SBS 2008. At that time (2009/2010 years) this was a very good offer for small businesses. In this case we’re talking about 10+ users. One physical box with Windows 2008 (not R2!), AD, DNS and DHCP and shares with GPO management. Exchange 2007, WSUS, some Sharepoint functionality and secure RDP through RDP Gateway. Add some SQL Express (2008) to the mix for some finance and LOB apps and Windows Backup to a NAS device. Throw in some Mikrotik devices on the edge and this cocktail was worth its price. In fact, it was working quite good even with Windows 10. It wasn’t speed monster but we’re talking about 10ish users working mainly on their laptops/desktops. And with proper maintenance everything run smooth. Till last Friday. Not because something crashed - nono. It was just high time to move to a more modern solution. With users familiar with Microsoft offering the choice was rather easy: Office 365 + Windows 2019 for local AD, LOB apps and shares.

After establishing what features users use the most on a daily basis, what are business owners’ requirements, budget and possibilities I’ve ended up with a design like this: 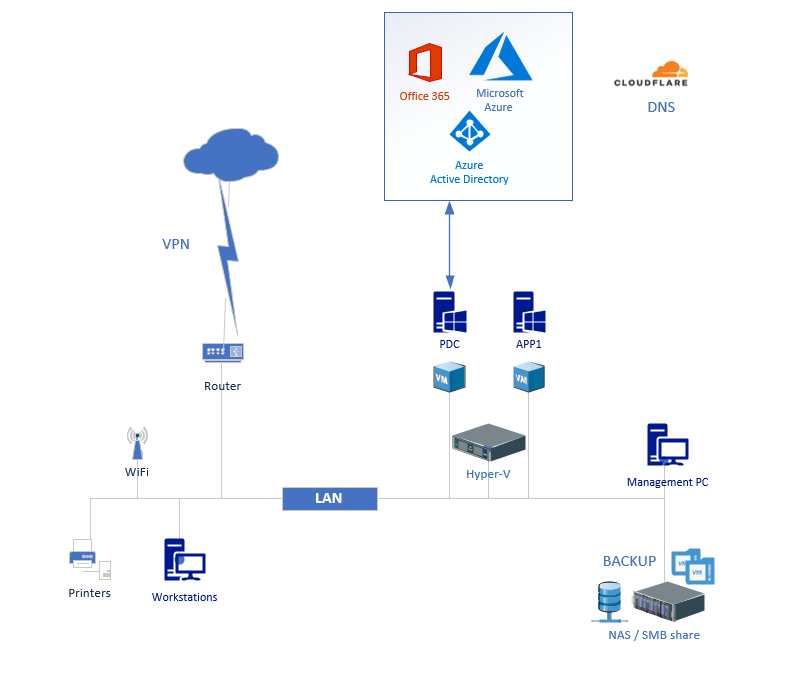 Most of this is already automated and the process is quite straightforward. In general it looks likes this:

At the end I’m documenting the environment using my OVF modules for AD/DHCP/DNS/HyperV and Cloudflare (PS Conf EU 2018) - more about this coming soon!

Each workstation has its own checklist in OneNote or printed: 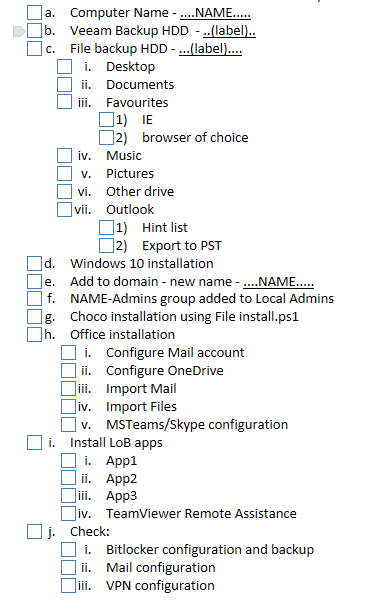 Believe me that after a few hours and few workstations things start to blurry and get messy. This HELPS a lot. And remember we’re not talking about Enterprise environment. We’re talking about small shop with legacy apps, user habits from past 10 years!

This migration took me about 24h from start to finish - one man job. That means double backup of each workstation (just in case), disconnect current domain, connect new domain (same IP subnet!!!), sync do AzureAD, reimage all workstations, restore data (in total ~100GB of mailboxes, ~100GB of personal files) , migrate SQL DBs (~40GB) , migrate shares (~50GB), double check everything, take care of those old pesky legacy LoB apps that just don’t want to migrate properly. Then additional 4h of “health care” for users on Monday - training time, explanations etc. After last scheduled migrations (of other companies) I hopefully will find some time to share all the PowerShell goodies I’m using! In the meantime more goodies are coming!

A bumpy road to get all users license assignment - second attempt!

How to transfer files and folder from remote machine using Bits

How to remove all artifacts from WVD

How to monitor actions in Windows Virtual Desktop