Down the Rabbit Hole

Some time ago I’ve started a blog! That was huge for me, although it was only a few click on wordpress.com and Cloudflare to set it up it took me a few hours to select a template. Yes, I’ve started a technical blog just to spend time selecting layout! Well, anyway, first post surfaced on 7th May of 2017 (New Module helper function). Not that I’m very proud of it. I had a lot of better topics to write about - I just didn’t know how!

Almost two years later I’ve decided to move the blog to GitHub. This is VERY easy and the blogs I mentioned here should help with the process. If you’d have any questions though, or wanted to ask anything - reach out!

I started simple - took Minimal Mistakes template, edited _config.yml file and pushed everything to GitHub. There’s nothing wrong with it but after each commit I had to wait for GitHub to build it (or not - and notify me via email about errors in files) just to spot my mistakes - wrong image path, wrong markdown syntax, etc.: 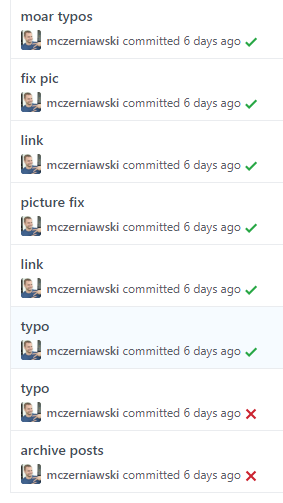 Time has come to set up Jekyll localy!

As I’m running Windows 10 I did want to try out WSL and set it up using Ubuntu flavor. IF everything would go smooth - I wouldn’t have the experience to share here

Installation is pretty straightforward (and well documented on docs.microsoft.com):

Thanks to Damien Solodow ( Web Twitter) for pointing out that Jekyll has tutorial docs regarding WSL - Jekyll on Windows.

This code would prevent me from having all those issues described below:

I hoped that this would be as simple as installing WSL. GitHub has a great tutorial as well how to do it but probably WSL comes into play here.

After that installing Bundler was easy:

Now, according to the tutorial I need to modify my gemfile and make sure it has specific entries. As minimal-mistakes template is using additional plugins my gemfile looks like this:

Now, switch to the directory where my blog repository exists and run bundle install:

Let’s fix it by adding ruby headers and then commonmarker

aaaand it’s not working either. This time it hangs on nokogiri gem. Only after CTRL+C it outputs the error:

Let’s build it with local libraries and finish install with bundle install again:

Wish it was a little bit more… straightforward. At the same time, great kudos to GitHub for doing the heavylifting!

A bumpy road to get all users license assignment - second attempt!

How to transfer files and folder from remote machine using Bits

How to remove all artifacts from WVD

How to monitor actions in Windows Virtual Desktop