This years PSConf was my fourth! First two times I was there as an attendee. Last year I was invited as a speaker and it seems I haven’t failed

as I was invited this year again! 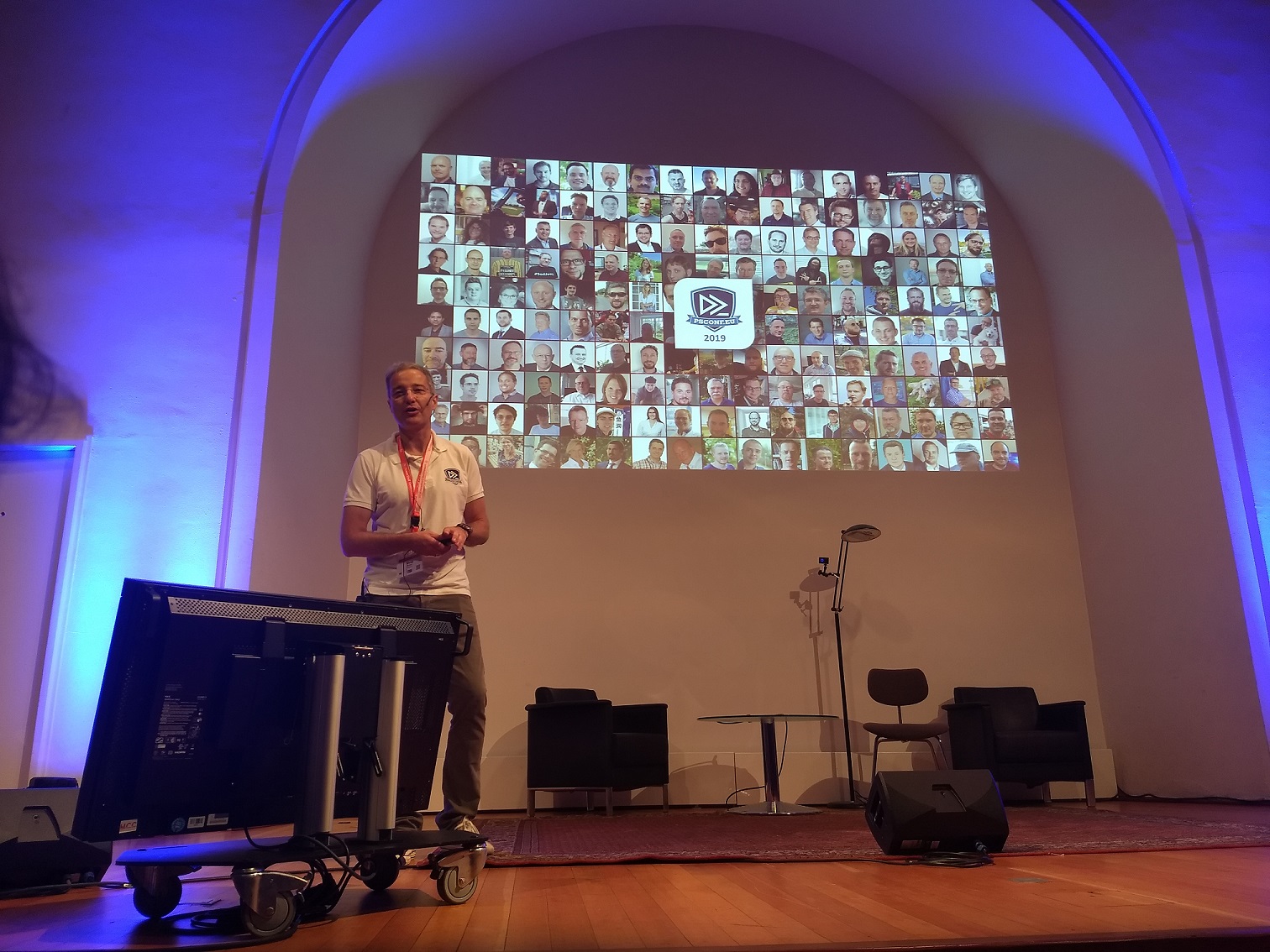 This two times tought me a lot. And I’m not talking only about PowerShell - as the level of expertise, knowledge and kindness I’ve experienced there is above any imagination. I’m talking about being one of many.
One of many awesome speakers that are evangelists and experts in their fields.
One of many attendees stoned by the organization and thoughtfulness of Tobias and the Team.
One of many listeners to others sessions - seeing how one can interact with the room.
And also - one of many that can meet the twitter handles.

If I would like to mention with just a single line, half of the people I met it would take at least 200 lines

This year I talked about Azure Log Analytics and PowerBI in two different scenarios. And although I had both session at the same day (which IS exhausting) I had a lot of awesome talks and ideas afterwards!

The first was about Windows Event Forwarding (WEF). How to set up basic Windows Event Collector server using Palantir guidance and how Azure Log Analytics can help you see through actions in your AD realm!
The idea behind the session was to introduce WEF and allow for easy deployments (through PowerShell automation).
The recording is already available (thanks to gigantic work of Thorsten Butz).

The second session was about Pester and Active Directory. How to manage and run Pester tests on-premises and use Azure Log Analytics and PowerBI to consume the results. The hidden gem here is that you get a documented AD environment in json files so you can easily store it in git!
The recording is here!

One cannot forget about the time AFTER the talks.
Though the day is packed with sessions from very morning till afternoon - there is still plenty of time for you. This year - I had no time for myself

The day I arrived I was swallowed by the atmosphere in the Hotel’s lobby bar. And though I went to the room to prepare for my sessions I soon went back to talk! I felt like a young boy meeting his favourite football team! THERE WERE twitter handles everywhere! The very same I follow everyday to learn new stuff!

Remembering previous years experience I approached every group I could, introducing myself and asking about other’s stories! (My introvert was having a nightmare!).

But the thing that threw me off was someone I talked to saying: You don't know me but I know who you are. And also another one asking if I fixed the thing he pointed out on my blog. SOMEONE READS MY BLOG and MET me @PSConfEU! Woooooot!

During the second day (the Zoo party) most of the time I spent with Friedrich Weinmann explaining to us mysteries of PSFramework! 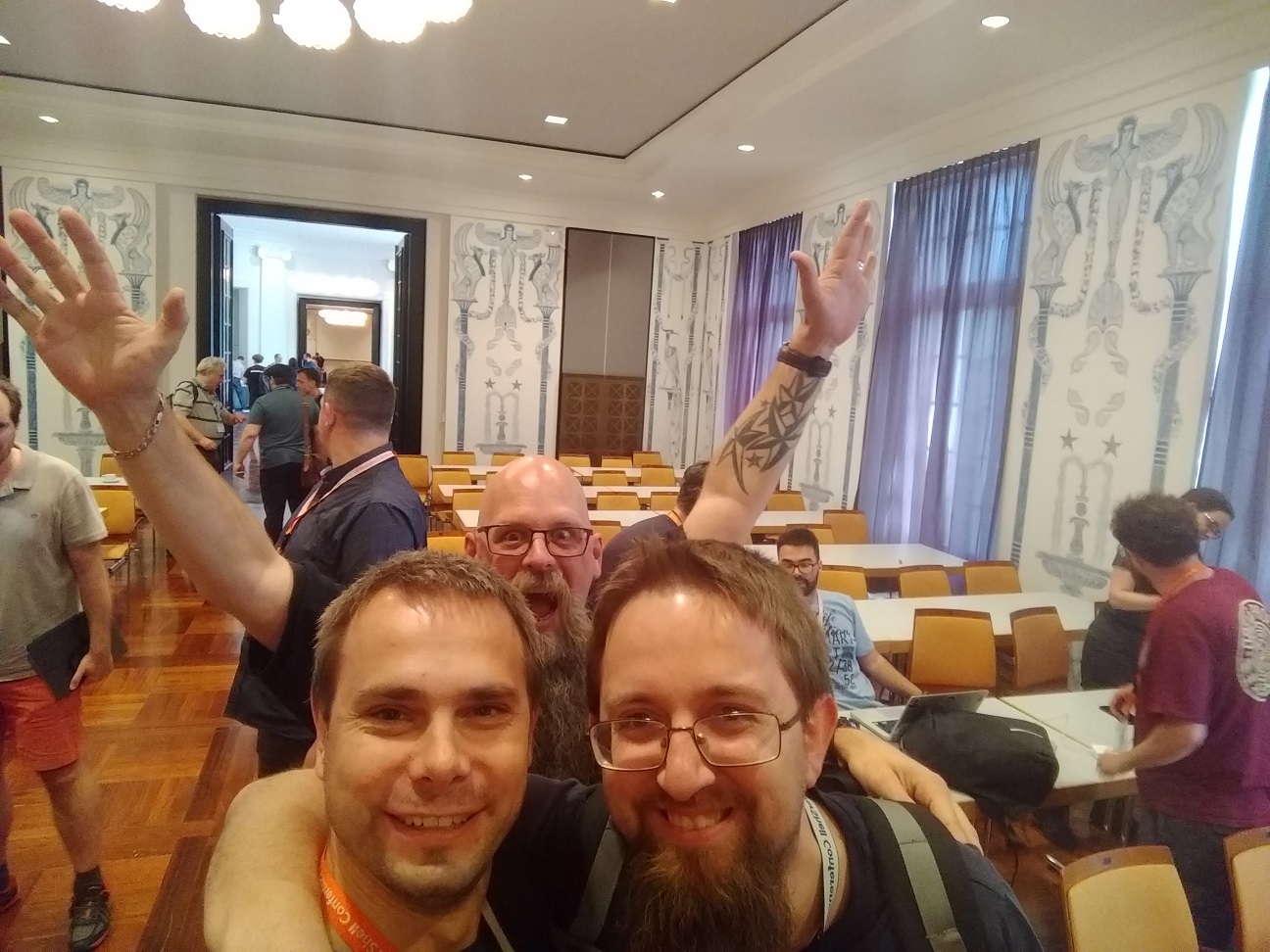 But one thing that best describes this after-hours-time at the Conference - I met Tomas Cerniauskas who’s working in Germany but is from Lituania. My father’s parents comes from Lituania - they came to Poland after 2nd World War. And my surname is Czerniawski! Call it a coincidense! 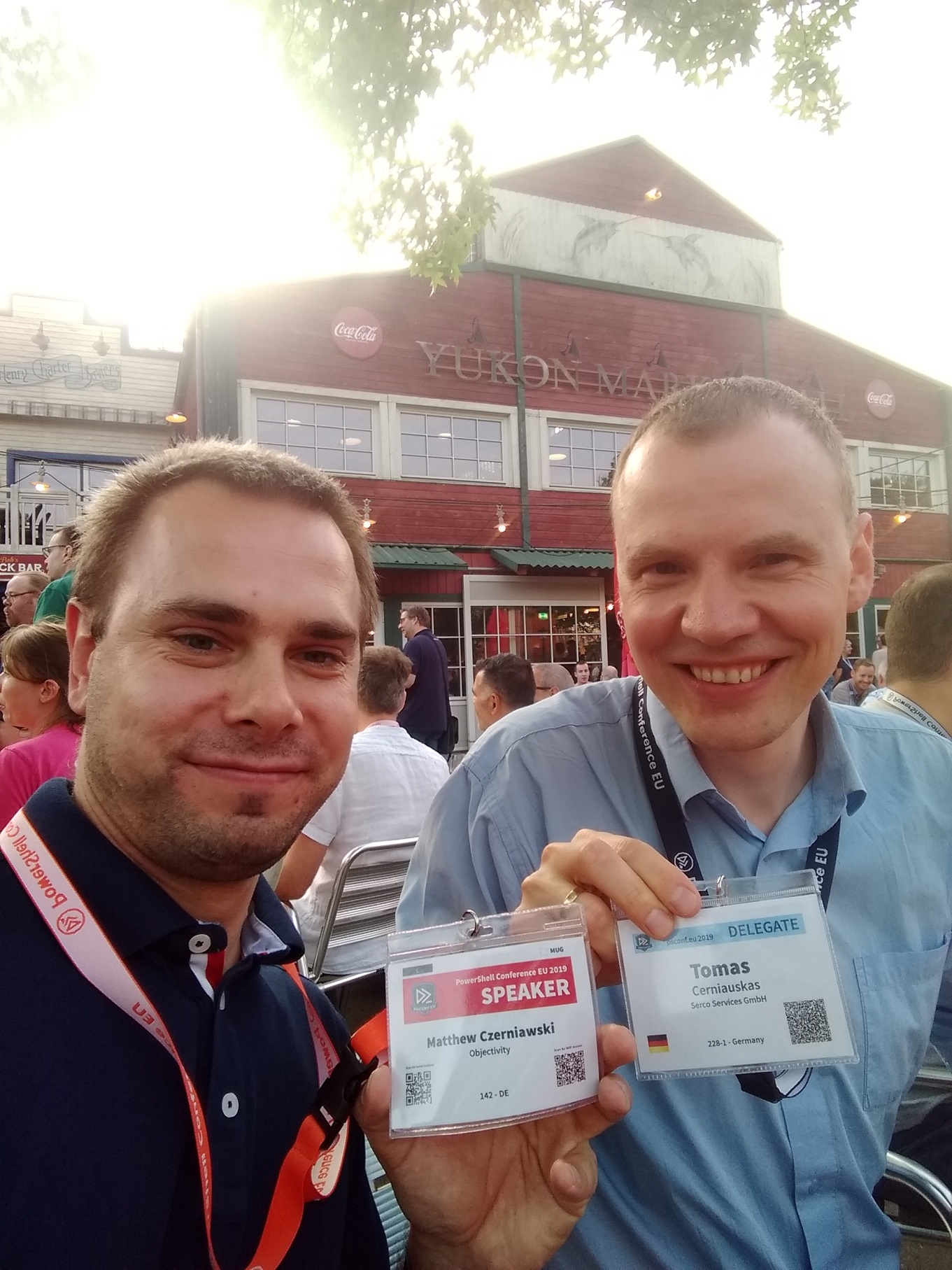 Wednesday - I remember only four things. First - delivering two sessions. Second - finally having a moment to chat with Jeffrey. Third - talking with Lee Holmes about Windows Defender ATP and Windows Event Forwarding and fourth - seeing a notification from Twitter Lee Holmes follows you! 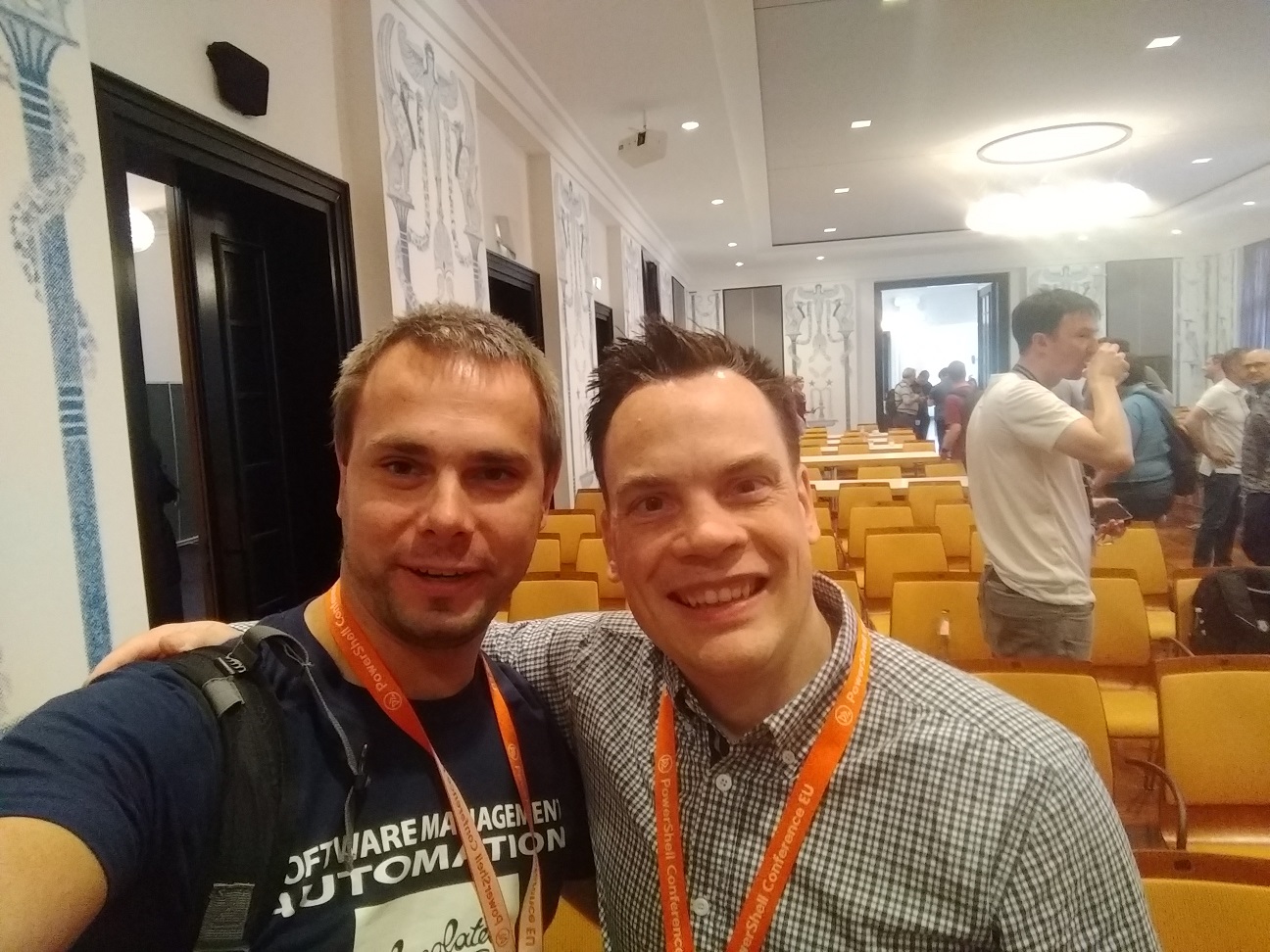 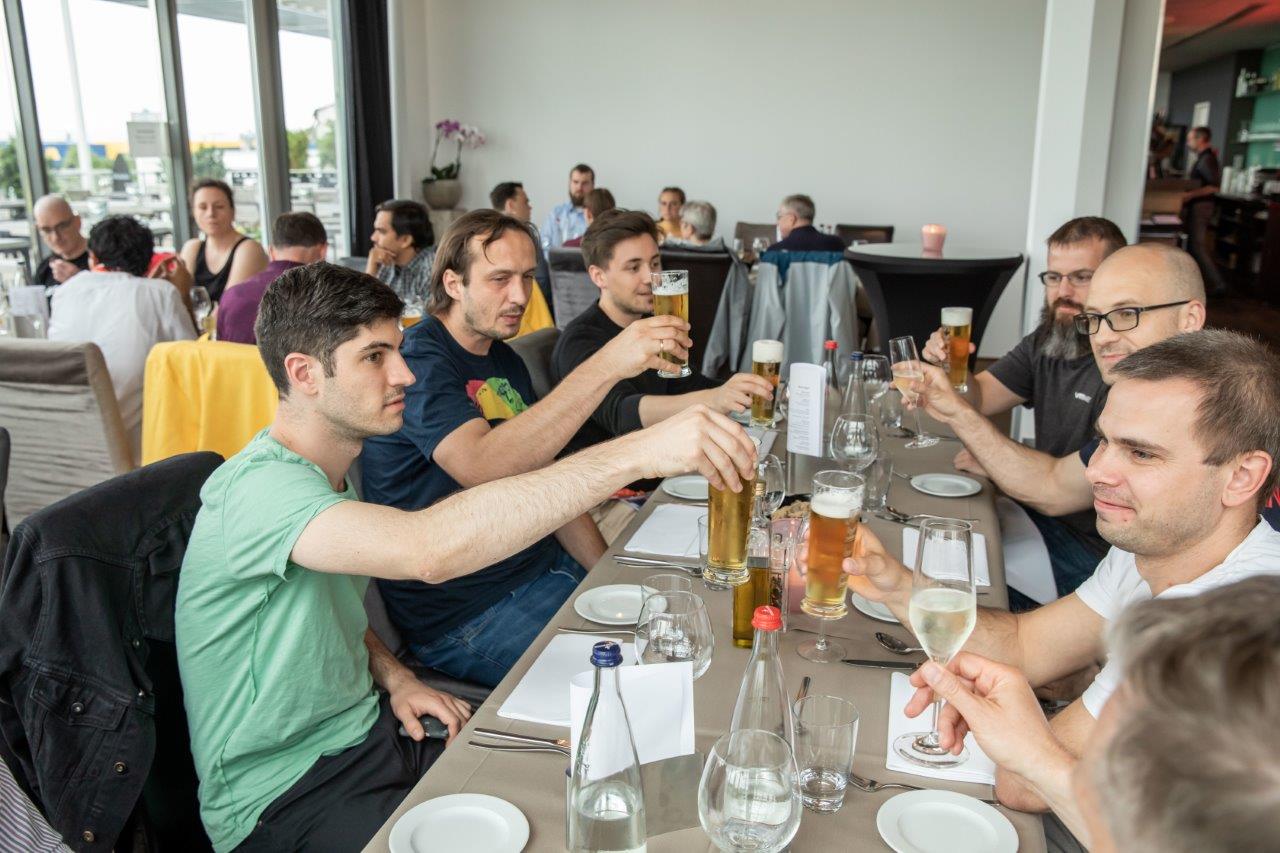 Weeks before PSConfEU were full of work, preparation and sleepless nights. What’s next? Even more sleepless nights - as the head is full of ideas. Now I just need an anvil (and time!) to forge those into something real! 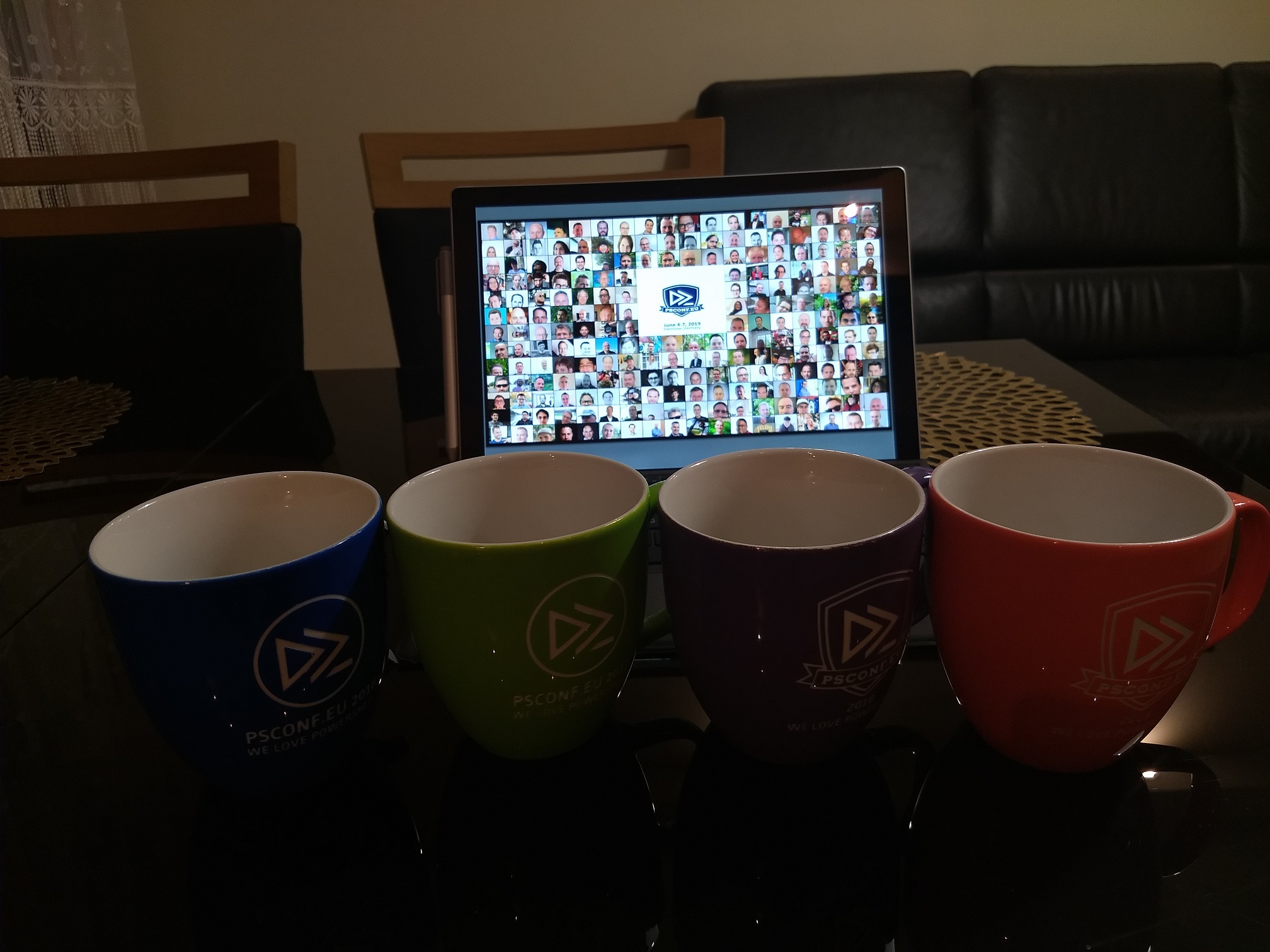 In the meantime I sent my CFP for PSConfBook volume 2 and to my surprise I was accepted. Also, last night I got an email saying I’m invited to #PSDayUK with my Pester + Azure (Monitor + Automation) talk!

And one last thing - AGAIN this year we were able to invite Bartek Bielawski and Jakub Jareš to our Polish PowerShell User Group Meetup this August!. Something tells me I smell a Pester Day!